And I have the photos to prove it. So the next time I have the opportunity to read in public they will be there to remind me that I've done it before and can do it again.

The last day of the Lowdham Book Festival usually sees the village crowded with people and cars, so it was strange to see everywhere so much quieter than usual. And to get a parking space!

There were still events going on at various locations around the village, so it was good to have time for a wander along the village high street, and pop into The Bookcase- the local independent bookshop run by one of the organisers of the Book Festival-Jane Streeter (who has just completed her term in office as the President of the Booksellers Association ).

They also host quite a few book launches and signings of Nottingham based authors. So who knows, one day...

So onto the main event- for me at least.

The Ship Inn is an old pub in the centre of the village, across from the village hall- a regular drop-in point for everyone on the last day. You can see a picture of the venue on the local crickets club's website, here.

It has a couple of traditionally decorated and very comfortable rooms. We were in the lounge bar which has tables, chairs, and stools on two levels, so you have to look over to the audience in the upper level too.

Following the advice from fellow writers who have read their work to an audience before, I chose a bright outfit, had a glass of water handy, and tried to remember to smile at everyone.

There was a microphone available if we needed it, but the three of us have reasonable reading voices, and the appreciative audience that had gathered wanted to hear the readings so we weren't competing with background noise.

After the previous group ran a little over time with their very entertaining selection of work, the other two Nottingham Writers' Club members, poets Viv Apple and Ken Swallow, took their positions ready to start. 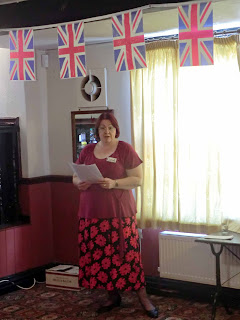 Introductions in The Ship, Lounge
(All photos courtesy of, and © of Richard Bevitt)


I did the general intoductions and was very relieved my voice had greatly improved since Thursday.

I handed over to Viv Apple, a very good poet and also a member of Nottingham Poetry Society.
She read four poems, including First Bra, which tells the tale of her teenage-self going with her mother to buy her first bra, with all the angst and pride associated with it.

Then it was my turn- my three pieces of flash fiction.

I started with a brief explanation of what had inspired 'Positive Exposure'- a radio interview with an actress who had appeared in one of the early Star Trek (the 1960's tv series) episodes, who described having to wear a brief outfit with no straps to hold the top half in place, which didn't when she breathed in- and to remedy the wardrobe malfunction, tape was used.

This was well received and the audience laughed at the final line and clapped- mentally I was breathing a sigh of relief.

I moved on to my second piece, 'Surpises', and mentioned the e-book anthology it would be appearing in later in the autumn.

My final piece 'Expectations' is another piece that came from the monthly One Word Challenge competition that is held each month on the Talkback writers forum. 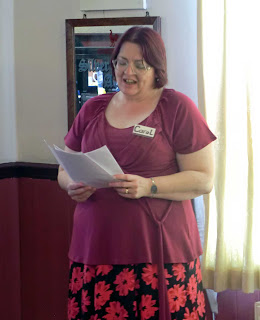 More applause and with my section over,  I handed over to Performance Poet, Ken Swallow for a couple of short action pieces.

Viv finished the performance with her amusing poem, 'I Don't Know You From Soap'. An Australian alternative to the 'I don't know you from Adam' phrase (apparently).

I finished by thanking the audience for listening to the club members work, and it was over.

The organiser of the Fringe event is hoping that it will be repeated next year, and perhaps with a longer running time, into the early evening.

I'm hoping more writers' club members will want to be involved next time too. (I'll be writing about it for the next issue of the club magazine 'Scribe'.

Would I do it again?

Looking at the audience
and smiling.

What did I learn from it?

That an audience really likes to hear fun pieces, so having something light in the chosen selection helps.


If you've never read to anyone outside of your friends and writers' group, and you get the opportunity to read your work to an unknown audience, do it. You really will enjoy it, and learn a lot.

You looked lovely, Carol, and so confident. Liked the Union Jacks. :)

Love the outfit, Carol, really suits you. And your dimple. No-one can resist those. Hope I can hear you read sometime! LXX

I'm glad it went well and your voice held out. See you on Wednesday.

Sounds a wonderful time was had by all, including you, Carol! The photos are lovely and I really like your outfit. Once you've spoken in front of an audience the fist time, it really does get easier. Good idea to have some lighter pieces too.

Liz y, thank you.
It was fun to have the flags still up from the recent Jubilee celebrations- and good for the photo.

Thanks, Liz. I like those colours, so I wasn't in a panic over wearing something bright.
I forget how obvious my dimples are when I smile... :-)

Thanks, Patsy. The audience were great which made everything so much easier.

And all the best for your upcoming Waterstone's book signing session for 'Escape to the Country'.

Thanks, Keith. I'll be writing about it for the Autumn Scribe. See you Wednesday.

Thank you, Rosemary. It was very enjoyable and I'll never be as worried again.

You look great Carol and congrats on it all going well

Congratualations, Carol! You look lovely, relaxed and confident. Good for you - I admire anyone who can do this, especially writers, who are more used to our own little worlds