I hope your Christmas went well.

Today is very foggy and cold, so apart from a brief trip outside I've been indoors in the warm, relaxing, catching up with friends online and reading.

I've also being making a few definite plans for the first few months of 2017.

With Take A Break Fiction Feast moving to only accepting fiction from those writers on their preferred list, it means that the remaining markets are going to be getting even more submissions, so I need to get on with writing and sending out the stories that I have ideas for (that fit their requirements).

But first I want to get on with adding to and revising my epistolary story (that I got second place for in the writers' club winter quarterly prose competition 2015/16), as there's currently a subscribers only competition in Writing Magazine for this form. The deadline for this is mid February, so my personal deadline will be the end of January.

Having not looked at it since the spring, my subconscious has developed the idea a bit more.

Of course I also need to get back to the second draft too.

Finally there's my annual word total that I reveal at the end of the year- to remind myself what I've done, and that I can do more the next year...

In 2015 I wasn't including my blog posts, which I did include this year. And of course when I'm editing something I'm usually taking away not adding words so that will drop the 2016 total a bit.

It's been another year of surprises, learning and improving.

Merry Christmas to All...

This is my last post before Christmas as I'll be busy this week with the final preparations for the big day, now all my family are home...

I don't have room for a proper Christmas Tree at the moment, so I have a little fold-out paper one that sits on my office window-sill; and there's purple, red and blue tinsel around the doors, while the Christmas cards get stuck to the wall with Blu-Tack. :-)

However you may celebrate this time of year... 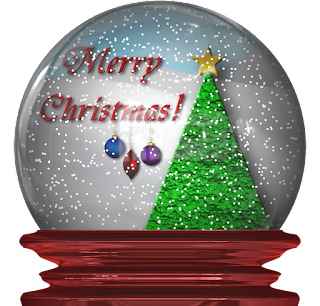 image from Pixabay
Posted by Carolb at 09:00 10 comments:
Email ThisBlogThis!Share to TwitterShare to FacebookShare to Pinterest
Labels: Christmas

Guess What I Won?

Well it's the day after the night before and I can now reveal what I've been keeping quiet about since late October...

I won one of the annual competitions at Nottingham Writers' Club, the Rosemary Robb trophy for a ghost story titled, 'The Wishful Spirit'.

Writers are told to persevere and never throw anything away. Well the story that won this competition proves that statement...

In 2008 it was the first year the ghost story trophy competition ran; it was for a 1,000 word story (that year). I'd never written a ghost story before, but I tried anyway, and received some useful comments from the judge- the writer whom the trophy was named after, and who died a few years later.

The story was filed away and over the years I'd revised it and then put it away again. You see my ghost wasn't the scary type and most markets wanted the creepy sort...

In 2013 I rewrote it and entered it into a national competition, but didn't get anywhere again. Honestly I think it was really just the wrong competition for it.

So back in the box it went until late 2015 when I began to rewrite it yet again making some major changes and eventually submitting it to Woman's Weekly, as they mentioned in their guidelines at that time, 'quirky', and my ghost certainly fitted that description.

Sadly it was rejected.

Meanwhile, as Prose Secretary for the writers' club, I'd asked writer Wendy Clark to judge this year's Rosemary Robb Competition this autumn ( after reading her blog post about writing ghost stories) and she agreed.

Having received the story back from the magazine I decided I'd enter it into our club competition to get some feedback, and hopefully find out what wasn't working.

As writers can have lots of contacts both online and off, the club has always asked members to use a pseudonym on their entry's cover sheet.
We know our judges would never be influenced by already knowing an entrant, and as Prose Secretary I'm careful not to inadvertently write or say something that one of our judges might see- if I know them, and I intend entering.

So I was absolutely amazed when the results were returned. I'd won! I actually read the email twice to ensure I hadn't misread it.

One of the comments in the judge's feedback that made me smile was, "I found myself chuckling at the phantom, Bold Jack's, asides and imagined him dressed in full 'Captain Jack Sparrow' pirate regalia!"

That wasn't too far off my mental image of 'Bold Jack' too, although older than the movie pirate... :D

So there we are full circle; the story first written for this trophy competition in 2008, finally won it in 2016. Even though it had rejections and all those revisions, the core of the story never changed.

Have you ever had any stories which took a long time to succeed?


Not long to go has a few meanings.

Christmas is of course fast approaching, and this coming Wednesday it's Awards Night at the writers' club.

I may have a few photos I can share next week...

College and Uni finish this coming Friday so I'll have a houseful from next weekend until early New Year. As much as I love my brood, it does mean any quiet time to write is reduced to a dripping tap that quickly gets fixed.

So there will only be a couple more posts until after Christmas.

Meanwhile I've been considering ideas for both my blog and Serena's.

I've also been catching up on my reading while I've had a spare ten minutes, or while waiting for appointments...

One of my recommended reads that would make an ideal Christmas present is From Story Idea to Reader by Patsy Collins and Rosemary J. Kind. And it's not because I know the authors.

This is a book I wish had been around when I first started writing, as it has a friendly and very comfortable and clear style; but there are sections more experienced writers can dip into that inspire me, and (new to me) techniques to try out. It's available on Kindle and as a paperback via Createspace, either from Alfie Dog (see link below) or Amazon.

I haven't finished reading it yet as I've not had enough free-time, so that's another delight to come over the holidays.

Earlier this year Patsy guest posted about using Createspace to turn her e-book novels and short story collections into paperbacks; and Rosemary is the owner and editor of Alfie Dog Fiction.

If you're in the UK and are signed up to Goodreads then there's an opportunity to win a copy. Click here.

I still have a number of photos to finish sorting and labelling up too, and I want to get a few blog posts written up for those busy times...