A brief message to all readers of my blog posts, thank you. 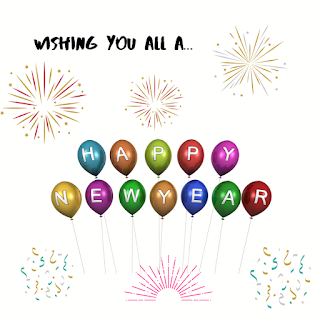 Balloons image by Shahid Abdullah from Pixabay.com with additional text and decoration via Canva.com
Posted by Carolb at 17:58 3 comments:
Email ThisBlogThis!Share to TwitterShare to FacebookShare to Pinterest
Labels: New Year, word count

The next few days will be even busier than they have been so far- Muffins, and Fairy Cakes are done, but the fruit cake is still to do.

On the present side I'm trailing behind; at least I have the wrapping paper and labels ready...

Whatever you may have planned, I hope you enjoy the Christmas break. And for anyone suffering from the winter bugs that emerge at this time of the year, I hope you feel better soon.


Posted by Carolb at 22:48 5 comments:
Email ThisBlogThis!Share to TwitterShare to FacebookShare to Pinterest
Labels: Christmas, postcards

2019 I was concentrating on my novel manuscript for the Romantic Novelists Association's New Writers' Scheme...

This year has been more about writing, learning, and developing my skills, but then writers never stop doing that.

I made a quick start on my 2019 plans, when at midday on the 2nd January, my email requesting a place the RNA's 2019 New Writers' Scheme (NWS)  Then, a few hours later I received the confirmation I was successful and had one of the available places.

Exciting and scary at the same time.

I began a 30 day trial of Scrivener in January, and by early February I was a convert. As the first nine chapters of my second draft were still in the (now) unsupported Word 2007, Chapter Ten onward was on Scrivener.

Scrivener helped me feel more confident and in control of my manuscript, as I was at the point where I was adding the scenes and elements absent from the first draft.

Mid-March was the Spring #SelfPubCon2019 (online conference) via the Alliance of Independent Authors (). Consistently interesting and worth setting time aside to watch/listen...

By April I'd made inroads into the new chapters, but there was an issue that I couldn't resolve and I had to consider adding a short prologue to the novel- a controversial point for many writers.

(I used a short one, but only once I'd completed the rest of the draft.)

May and June were the two bad months of the year, stress and then more stress when our change of broadband and phone supplier went badly. It's when you don't have instant access to broadband that you realise how much of life has moved online, and how vital it can be when you need to check a simple thing such as a bus or train timetable.

Fortunately, I could still access Scrivener, but it was time-consuming looking references in books, and those times when the saved link I needed to refer to was in the bookmarks on my browser. All I could do was make a note for checking it later...

July was much needed fun with the RNA Conference in Lancaster. Beneficial in lifting the emotions, learning, socialising and saying hello to online friends who you've not met in real-life before- this year it was the lovely Rosemary Gemmell...

August was long hours on the manuscript as the countdown to the NWS deadline loomed at the end of the month. I don't think you can ever know how you'll deal with the situation until you face it.

I've learnt how I write and how I can next year.

September was a mixed month. I had the good and the bad. Good was meeting up with and blogger Patsy Collins, who stopped off in Nottingham to deliver a workshop to Nottingham Writers' Club members and visitors.

Two weeks later, I had my reader's report back from the New Writers' Scheme.

The second half of October was busy; there was an opportunity to hear from Amazon KDP (arranged by the Society of Authors) at the Nottingham Mechanics in the city centre. An interesting evening...

Following a link on Twitter I discovered the Romance Writers Summit, and it was worth the time as several sessions helped me resolve a few of the issues identified in my NWS manuscript.

The Nottingham RNA Chapter held an afternoon workshop on being social

I was back in Leicester at the New Walk Museum for the book launch of Rosemary J Kind's latest novel, Unequal by Birth. A good event and lovely to meet Rosemary, whom I've been online friends with for many years, but never in person until this event.

November has been carrying on the tasks I began in October. I've been improving my knowledge, identifying my writing weak spots and working on them. I'd begun loading two other novel drafts onto Scrivener and updating the notes, character bios and research points along with the chapter outline of a contemporary first draft.

Now it's December and I've renewed my New Writers' Scheme membership for 2020.

Across the year I've continued to attend regular meetings of the Belmont Belles, and the Nottingham Story Weavers- the Leicester, and Nottingham RNA Chapters. Wonderful and supportive writers in both.

I'm still part of the team running Nottingham Writers' Club, so nothing changes there.

I got a place on the NWS and kept working on that second draft for August. And I also took up opportunities that came along (even though they weren't writing).

I'm following my original plan for the RNA's NWS; submit my historical in 2019 and one of my contemporaries in 2020. (I'm just finishing some necessary research for it) and I have the first chapter of the 2nd draft.

(As soon as I complete the contemporary, it will be back to rewriting the historical.)

Again, I'll be open to writing and writing-related opportunities throughout the year.

I'll continue to learn new things and improve my writing.

I didn't think I'd done much besides writing, but reviewing the year I realise that I have done much more than I thought...

Posted by Carolb at 18:01 4 comments:
Email ThisBlogThis!Share to TwitterShare to FacebookShare to Pinterest

A quick post to update on the results of the recent Diagram Prize for the Oddest Book Title of 2019, and the Bad Sex in Fiction award.

Now the Diagram Prize for the Oddest Book Title has been getting less press coverage than in past years, which is a pity as there's been many chuckle-inducing titles over the years.

My favourite for the title was the bible stories, Noah Gets Naked..., with the Ending the War on Artisan Cheese as a strong contender. Sadly the Cheese related book came in second place with 24% of the vote; While the Bible Stories title came third, garnering 18%.

The winner for 2019 was The Dirt Hole and its Variations by Charles L Dobbins that won 40% of the public vote. Sadly he died twenty-two years ago, so a posthumous winner.

Read more about it at the Bookseller.

The Bad Sex in Fiction Award (like the Booker Prize this year) has announced two winners; Didier Decoin for The Office of Gardens and Ponds- my choice for this year. And John Harvey's Pax.

You can read about the judge's dilemma in choosing a winner also over on the Bookseller.