A Selection from the Fashion Museum 100 Objects...

I hope you've enjoyed my blog posts about my museum visits last month: the Museum of Bath Architecture and the Bath Postal Museum.

Now it's the Fashion Museum and their History of Fashion in 100 Objects, running until January 2019, alongside their smaller and recently opened Lace in Fashion.

I've split up my selected images between my blogs here and over on my Serena Lake website, so I hope you'll visit Serena's page to see some of the interesting 18th century items I've chosen, reflecting the time periods I'll be writing historical romances in, under my pseudonym.

(Many of these images have had light applied in the preparation for sharing them with you. Also with the big panes of class reflections or shadows do sometimes get caught, so whenever possible I crop the images to centre in on specific items.)

Bath is often associated with Jane Austen and the wonderful costume dramas of her works, so here's a section of dresses from the first half of the 19th century with it's muslin and printed cottons, elegant classical designs and trains going onto frills and flounces...


The shoes on the raised platform (bottom left) can be seen in more detail on Serena's blog post.

There was a delightful display of baby bootees too, again from the 1800's. Some were embroidered, others quilted and fairly plain.


Some men's clothes were included in the 100 objects, but I suspect that not as many items may have survived as women's. There were waistcoats, jackets and a lovely velvet suit- whoever the man was that wore it, he must have had women wanting to say hello!

Also there was a pair of men's trousers from the 1820's, as the display moved into the Victorian period and clothes seemed to become more sober.

There were a few items in their own individual display cabinets.

I particularly liked the Dolman from the 1870's.


This would have been worn over a dress with a bustle. It was part cape, part coat. Some of the large cashmere or paisley shawls were used to make these new types of outdoor wear. As it hangs over the bustle at the back, it does drape well and add to the shape.

Underwear did feature. There were some stays, and this corset from the 1890's.


It's silk stiffened with whalebone. The waist is 21.5 inches with the tight lacing, but could be let out if needed. I'm not sure anyone would want to eat much laced that tight!

On into the 20th century I chose one item I hadn't realised existed- and I suspect they will appear in the party scene in my 1920's story. Dress Clips.

The dress clips were designed to add sparkle to the corners of the square-neck dresses and round or V shape necklines.

These clips are just a small part of 350 that were collected by a primary school teacher, in Frome, Somerset, Sheila Beeson - over a 40 year period.

From there the exhibition moved on through the WWII and the post war period.

For me fashion seemed to have lost its way after the 1930's. Now we're just repeating the past 50-60 years with slight variations.

Choosing the 100 objects that represent the changing face of fashion history must have taken a lot of discussion and planning. And that's before the museum even began the process of creating the display.

No matter the time period you're interested in, there's something in the exhibition to be appreciated.

There's more shoes, and the additional Lace exhibition in the darker storeroom area, displaying how hand-made and manufactured lace has been used in clothing across the decades too.

The Bath Postal Museum is another delightful Bath gem that would probably get missed on a weekend visit-if you didn't know it was there.

Considering how much there is too see, it's been thoughtfully laid out to make the most of the space; and for children there's fun things to do too.

I knew a bit about mail coaches and what they looked like, and also about turnpikes from research for the first novel I tried writing, but there was so much more I didn't know.

For example the mail went to and from London along six routes, until Ralph Allen, the Postmaster of Bath, began an expansion with cross routes. 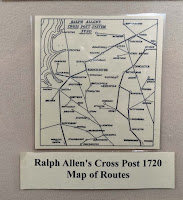 By later in the century Mail Coaches became a necessity, fast, efficient and they had a guard to protect them.

My favourite item in the museum was being able to listen to the different horn calls that were used during the mail coach journey; there were various warning calls: to the passengers to get aboard, to alert the inn to get the horses ready, the turnpikes open, and when they finally arrived at their destination among them. Each slightly different, but you can hear the echoes of future military bugle calls.

The display of Post Boxes certainly reminded me of a few from my childhood. Did you know how many types there have been? There's a few on this link.

This is the post box in Laura Place, and there's another on Great Pultney Street, both are hexagonal, the 'New Standard Letter Box', designed by J.W Penfold in the 1860's.


I've only chosen a couple of items to show you, but there's so much more to see and discover...

As it's Sunday it's the Museum of Bath Architecture...

I'm going backwards for this visit to Bath, and sharing the smaller less well-known museums in Bath first.

Last Sunday we (husband and I) visited the Museum of Bath Architecture (which appears on some tourist brochures/maps as the Buildings of Bath) and it was well worth the visit.

The exhibition is located in the Countess of Huntingdon's Chapel along the raised pavement of The Paragon, The Vineyards. It's owned by The Bath Preservation Trust who are also involved with No.1 The Royal Crescent (I visited there on my last trip to Bath in 2014).


(You'll see a cape belonging to the Countess in a later post.)


If you don't know anything about the architecture of Bath there's a very helpful video to start you off, before you go on to discover the various crafts and the tools used by the men who built the distinctive houses from the lower to the upper end of the city.

(When I'd been waiting for the Fashion Museum to open the previous day, we'd wandered into The Circus, and one of the pictures I took was of the stone acorns finials that run around the roof line, and we both assumed they had some symbolism.)

So it was a surprise to turn the corner of the first display cabinet and there was a large stone acorn, similar to those in the Circus, though this one was from The Royal Crescent. [1]

Yes, it is symbolic.

John Wood (the Elder) who designed The Circus, sadly died three months after the foundation stone was laid, and the building work continued under the Younger John Wood. The elder Wood was strongly influenced by Stonehenge ( he studied and wrote about it) and other stone circles- the Druids were in there too...

On a previous visit to the Circus it was a very sunny May day, the sun was almost in alignment with Gay Street (that leads up to the centre) and it's easy to see the stone circle influence with his design.

The acorns reference Bladud- who is supposed to have discovered the healing hot waters of Bath; his pigs- suffering from a skin disease- were looking for acorns to eat and were cured by the hot spring.

There were a few items that I particularly enjoyed seeing; the Mason's Level with a lead plumb weight. [2]

But the most impressive item has to be the model display of the city, and you can press buttons that lights up the best known locations. (see image at the bottom of this post) [3]

By the time we'd worked our way around the displays you could really appreciate the skills of the men who did the actual building work, they brought the architects designs and visions to reality, using many of the tools that craftsmen today would still recognise.

Even the little models required skill and are interesting too. [4]

You can see a few of the other items from the Trust's collection, here.

I've only mentioned a few things, but there is so much more to see and learn.

It's a small museum, and like many smaller places across the country, they like (and welcome) visitors. So if you get the opportunity do go, you won't be disappointed...