Saturday's 'Georgian' visits are going to be split up into two blog posts, as the Fashion Museum deserves a post by itself; and as No.1 Royal Crescent doesn't allow photography, I don't have any of my own images to show you, just links where you can see more. So No.1 will share a post with the Jane Austen Centre...


The Fashion Museum is downstairs in the Bath Assembly Rooms.
It is just around the corner from The Circus, and just beyond that is the Royal Crescent.

As I was at the Pultney Bridge end of the city I had to walk uphill for quite some distance, but at least going back it was all downhill.

2014 is 300 years since the ascension of George 1 to the English throne, there have been a number of exhibitions, and television/radio programmes, taking place about the Georgians.

Bath has such strong associations with Georgian Society, so where else would you expect to see the wonderful clothes worn between 1714 and 1830...

For anyone unfamiliar with original historic costume, displays such as this have rules. No flash photography- bright light or even natural light (sunshine through the window) would damage and fade the material, so you'll see from my photos that the lighting is low. Likewise the environment around the clothes is strictly controlled. At the end of the year, the clothes on display will go back into storage to rest...

I'm only going to pick out a few of the images I took. But it will give you an idea of the range displayed. If you can get to the exhibition you won't be disappointed.

The Georgians were not scared of colour, and even the men wore pink- sort of!

I'd seen one of the Mantua Court Dresses before- many years ago- but there were three on display, and my photo does not do them justice- they are wide!

My favourite has to be the Red Woven Silk Damask dress from about 1750, I could see my Dorset novel heroine wearing this...

You have an audio guide that you take with you, and whenever you see the guide symbol with a number beside it, you press the buttons and press play, to hear details and relevant information.

Now to the gentlemen,  though they featured more noticeably in the storage area of the exhibition that goes from 1800 to the early 20th century. 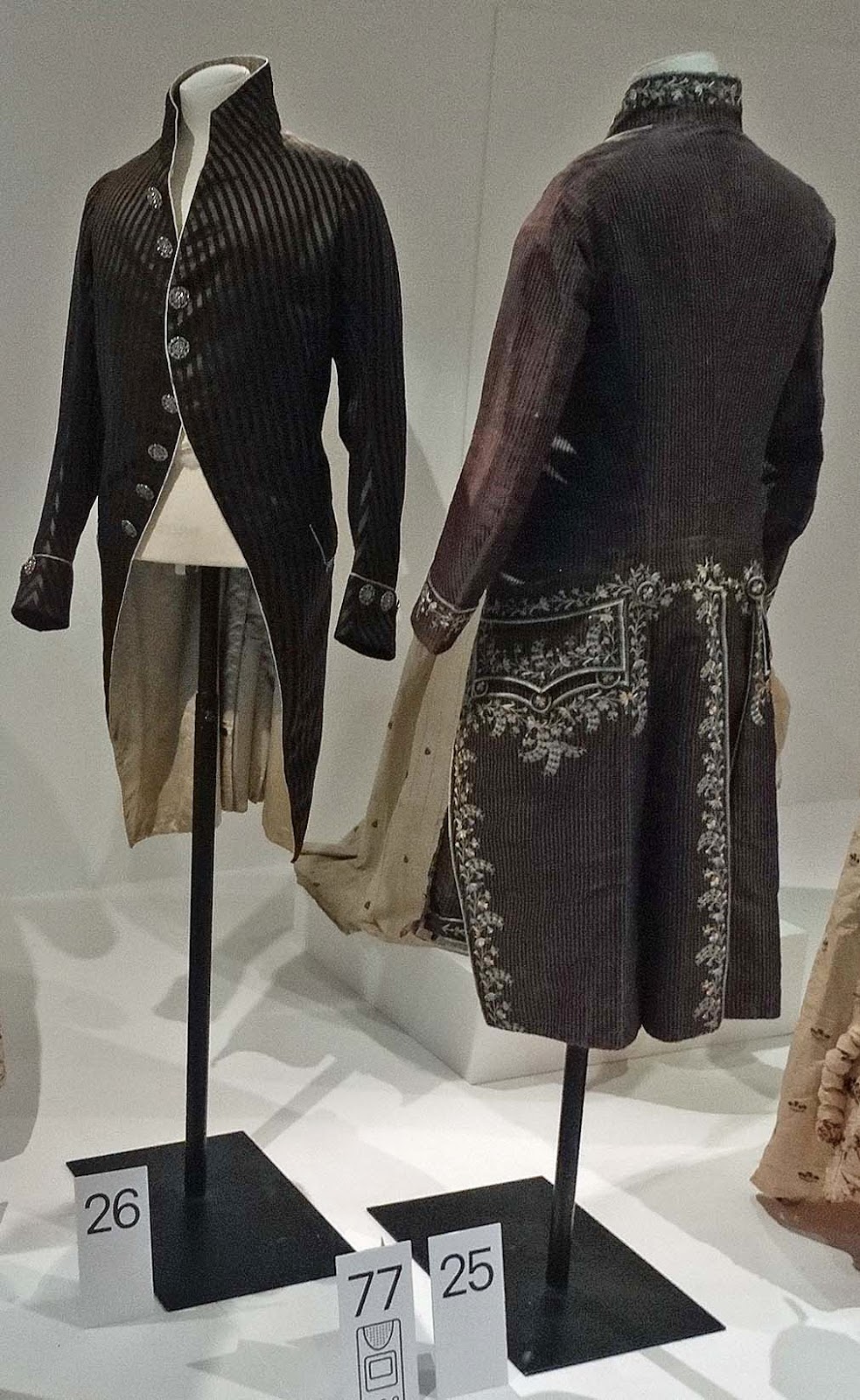 The image of the men's coats has been digitally lightened so you can see the decoration against the dark fabric, which isn't as clear in the original light level.

(You can see the audio symbol with 77 beside the bases for the men's coats...)

The exhibition moved onto a small display of designer outfits inspired by Georgian fashion- including a Vivien Westwood dress- long, pink and purple with a big bow...

If you think the Georgians used a lot of embroidery then you have seen nothing until you reach the 17th century gloves on display. They are currently on loan to the museum from The Glove Collection Trust, but were items where photography was not allowed at all. Their original owners were definitely peacocks where fashion was concerned...

There was then a section of the modern- an ongoing exhibition- with fashion designer David Sassoon's donated archive of fashion drawings, charting the history of the firm Bellville Sassoon Lorcan Mullany.
This part of the display included three outfits designed for Diana, Princess of Wales, and immediately recognisable- she was a Spencer before marriage, and was related to Georgiana, the Duchess of Devonshire, a well known Georgian.

Moving on it's the Georgians in the 19th century and a peek into a part of the storage area. This was much darker, so again no photos.

Fortunately there was seating available as some of the audio commentary was longer than earlier pieces.

Each display featured a specific time period set among stacks of labelled identical storage boxes. The first featured simple white muslin gowns from 1800, and there was a coat worn by Lord Byron's bride- her going away outfit...

As you moved round the room you could see how fashions changed as you progressed from the Georgian into the Victorian.

Each display highlighted certain aspects of the changing designs; and in one case to one side there were rails of neatly hung but covered waistcoats- I would have liked to have seen all of them...

My tour was over and I climbed the stairs back to the present day. I couldn't leave without popping into the ballroom first, and peeping in to the Octagon, set out with chairs and display equipment for some event.

I wandered into the Tea Room and on into the Card Room that is now set up with a bar and a café.

As I sat there fortifying myself with drinking chocolate and a scone ( plus jam and cream of course) before I made my way to The Royal Crescent, I couldn't help but imagine those men and women who had passed through the rooms in their finery, each with their own dreams and fears...

You can find out more about the Fashion Museum at: www.fashionmuseum.co.uk

Looks like an excellent research tool for anyone writing about the period.

What a lovely place. I think I need to return to Bath...

How gorgeous! You're really making me want to go there, Carol :-) x

Love the fashion displays and only saw them briefly once long ago - definitely need to go back to Bath!

It is, Patsy. I was certainly able to better visualise my character's appearance after having seen this exhibition.

Though anyone wanting to find out more can use the Collection search on their website, or book to use the study facilities.

It is certainly worth visiting whenever you have the time, Helen.

There's such a wide range of museums to visit, Teresa, that there really is something for everyone. If I'd had a few days more there were another three I would have visited. :)

Hope you get an opportunity to go to Bath in the future.

The good thing is that they have different exhibitions, Rosemary, so you can visit one year, and you'll see something different the next year, or even later in the same year.

I get their newsletter, so always know what exhibitions are going to be on. :)