A Long Wait but Worth It...

We'd been fortunate to have the wonderful Sally Quilford setting and judging this flash fiction competition. Sally had done a mini workshop in the summer on the subject, so the competition was an opportunity to show what we'd learnt with our entries.

When the competition opened I had three months before the final submission date, and I had a few ideas rolling around my brain to fit the theme of 'A Christmas Visit'.

My first idea was a parent visiting their baby in a neonatal unit on Christmas morning. That thought was inspired by my own memories of going to see my premature triplets in hospital on Christmas Day- they were only a few weeks old at that point.

But I couldn't write it, the words wouldn't form, the emotions too deep to catch and share with my characters.

The weeks went on and the deadline approached.

Then a vague idea that had been lingering began to demand attention. What if you had to go and deliver the sad news of a death at Christmas? And bad weather hampered the task too (heavy snow).
And because I inevitably write romances, how would the messenger feel if they are giving that bad news to someone they have been in love with for years?

Generally we think of good things happening at Christmas, but we know that isn't reality, and that must have happened in the 19th century too. But the story could still have a positive ending.

I settled down and wrote about 550 words, cutting and changing to get it to the 500 word limit.

Then I realised that it was just an advance snippet of a longer story- this usually happens with my short stories, I just can't keep them small, they all want to be full scale productions... :-)

Then disaster struck, in the New Year we discovered the entries had never reached the judge, so we had to re-run the competition- and a big thank you to Sally for having fitted the new judging dates into her busy writing schedule.

So last night at the May speaker meeting, the results were finally announced, and my entry 'A Second Chance' won. 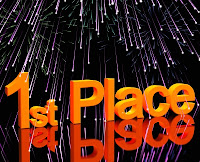 It will be turned into a longer story.

(I chose the pseudonym, Fiona Faddy for my entry)

"I chose the first prize winner, A Second Chance by Fiona Faddy because I’m a sucker for unrequited love! Fiona packed so much emotion in to so few words. The opening lines immediately set the scene and let us know we were in the past. The ending was just sweet!"

If I hadn't been intending to use the piece in future, I would have posted it here. But I hope you'll get the opportunity to read it when the longer story is completed- and hopefully published somewhere...

Aaaw, sounds fabulous, Carol, must have missed you saying about this on TB! Congratulations!

Brilliant news, Carol. Looking forward to seeing it in Scribe. I wish you well with all the other competitions.

Well done Carol! There was I thinking, "How can she get so much into 500 words?" and hoping to find out, and you pulled the rug away!

Thanks, Keith. I was amazed to find I'd won as there was stiff competition. See you soon.

I find comments sometimes get lost, Rosemary. Thank you. :-)